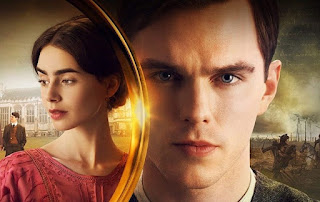 This past Saturday I went to see the new Tolkien film directed by Dome Karukoski and produced by Fox Searchlight Pictures.

Allow me to preface this by saying that I was obsessed with the Peter Jackson's The Lord of the Rings films when I was in high school and college. Those films, while flawed, were my gateway to the majestic world of Middle Earth and all of its beautiful characters. Since then, I have grown to see the superiority of the books, and I count them among my top ten favorite literary works. And while I am hardly a Tolkien scholar, I hold him in high regard and admire him not only as a great writer and linguist but also as an ardent Roman Catholic. In sum, I went into this film expecting to be greatly disappointed.

I enjoyed many aspects of the film immensely. The cinematography was wonderful, and the incorporation of the many fantastical elements through phantom-like appearances of knights on horseback, dragons, and so forth, combined with a gorgeous soundtrack by Thomas Newman, transported me to the world of Faerie in a wonderful way.

Another one of the strengths of the film was the camaraderie amongst Tolkien and his classmates. During his time at Saint Edward's School, Tolkien and several classmates formed an unofficial society titled the "Tea Club, Barrovian Society," also known as the T.C.B.S. According to the film, the group would meet at the tea shoppe, Barrow Stores, and discuss art and literature and critique one another's work (a precursor of the future Inklings). Their friendship and their love of art bore a wonderful resemblance to the poetry club established in the well-known Robin Williams' film, Dead Poets' Society.

Favorite moments? 1) One of the early scenes when the two Tolkien brothers are play-acting with their mother, Mabel; 2) the TCBS scenes when they are kids walking through the streets shouting their battle cry; 3) Edith dancing amongst the trees (this scene was far too short; I needed more of this magic in my life); 4) all the little scenes of Tolkien sketching his creatures from his imagination -- I love that the director pointed to the fact that Tolkien was an artist as well as an author; 5) the opera scene with Edith. These are just a few of the delightful moments and they exceeded my expectations in many respects!

My chief criticism is the lack of attention to Tolkien's faith, which was heavily influential on his life, both circumstantially and personally, and on his literary works. For those who may not know, Tolkien's father died when Tolkien was about three. Five years later, his mother Mable Tolkien, raised Baptist, converted to Roman Catholicism, resulting in her family withholding all financial assistance. This left the Tolkien family completely destitute save for the charity of the Catholic Church. Tragically Tolkien's mother passed away from acute diabetes in 1904 (Tolkien was about 12). Before her death, Mabel entrusted the care and upbringing of her sons to her friend, Father Francis Morgan of the Birmingham Oratory.

These events left a deep impression on Tolkien as evidenced by the quote written about nine years after his mother's death: "My own dear mother was a martyr indeed, and it is not to everybody that God grants so easy a way to his great gifts as he did to Hilary and myself, giving us a mother who killed herself with labour and trouble to ensure us keeping the faith."

There is a moment in the film where Father Morgan criticizes Tolkien's romantic pursuit of his childhood friend, Edith, because she is not a Catholic. This comment falls short because it has been poorly contextualized. What could have been a moment of heightened drama for Tolkien, both in regards to his relationship with the priest and in regards to his relationship with his faith as a practicing Catholic, falls flat.

The director and writers chose to focus more on the friendships established in the TCBS; while there was plenty of material here as well, nevertheless, I think the lack of attention to his Catholic faith was a missed opportunity for a great subplot.

In conclusion, I enjoyed the film considerably. If I were to rate it in comparison to Peter Jackson's The Lord of the Rings films and The Hobbit Trilogy, I would agree with the Prancing Pony Podcast hosts, Alan and Shawn, placing it slightly higher than An Unexpected Journey.  I heartily recommend going to see the film if you are a Tolkien fan!

In the meantime, I will be listening to this Thomas Newman soundtrack ad nauseum.

P.S. You don't have to take my word for it: best-selling author and die-hard Tolkien fan Neil Gaiman also recommends the film!