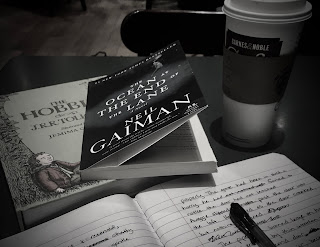 In Neil Gaiman's adult fairy tale, The Ocean at the End of the Lane, an ordinary little boy encounters a girl and her family who identify themselves as the Hempstocks.

The little girl, Lettie Hempstock, lives on a nearby ramshackle farm with her mother and grandmother. At first glance, Lettie and her family seem like humble, simple folk, wise and warm and generous. In a brief exchange at the beginning of the story, Lettie reveals that she and her family are not at all what they seem:

"Once you've been around for a bit, you get to know stuff."

I thought for a bit. Then I asked, "How long have you been eleven for?"

She smiled at me.

-- Neil Gaiman, The Ocean at the End of the Lane: Chapter 3.

After a few more similar cryptic exchanges between the little boy and the Hempstock family, it is readily apparent that the Hempstocks are not only much older than they look, but perhaps even of another world.

Nevertheless, like most families there is tension amongst the family members. While the mother and grandmother choose to observe the world from a distance, Lettie's modus operandi is to to take action. She sees the evil forces threatening the little boy and his family, and chooses to combat them, at great risk to herself and others.

As I was reading this passage I could not help but think of the similarity between Neil Gaiman's  Hempstock family and Tom Bombadil from J.R.R. Tolkien's The Lord of the Rings. When the hobbits first encounter Bombadil in the Old Forest, he seems like a jolly, carefree fellow. He is described as "Master of Wood, Water, and Hill", at home among the birds and the beasts as he leads a quiet, pleasant life by the river with his beautiful wife, Goldberry.

However, similar to the Hempstocks, it becomes clear that Bombadil knows more than he lets on. Behind his jolly visage there are hints of great age, knowledge, and even power. Bombadil tells Frodo and his companions that he was present when the Elves first came West, and Lord Elrond of Rivendell later confirms that Bombadil was considered old during the Elder Days (a.k.a. the First Age of Middle Earth. The Lord of the Rings takes place during the Third Age, making Bombadil thousands of years old).

What is truly remarkable about Bombadil is his indifference to and even authority over the One Ring. He is not the least bit affected or tempted by its power, and seems more concerned about tending his own lands than in the Ring. In addition, he can see Frodo when Frodo puts the Ring on, and he can wear the Ring himself with no effect, even making the Ring disappear and reappear at will.

Nevertheless, similar to the older generations of the Hempstock family, Bombadil prefers to remain aloof from the plight of those around him, even though he realizes the gravity of the situation which threatens Middle Earth. While Bombadil rescues the hobbits first from the cantankerous Old Man Willow and later from the malevolent Barrow-wights, he does not involve himself in Frodo and Gandalf's quest beyond this point.

What are we to make of this type of lifestyle? In a modern western culture where the trite adage "With great power comes great responsibility," is upheld, the Bombadil option is a difficult mode of existence to understand or accept.

However, when Tolkien was asked about Tom Bombadil's role (or lack thereof) in The Lord of the Rings, he responded:


"The story is cast in terms of a good side, and a bad side, beauty against ruthless ugliness, tyranny against kingship, moderated freedom with consent against compulsion that has long lost any object save mere power, and so on; but both sides in some degree, conservative or destructive, want a measure of control. But if you have, as it were, taken 'a vow of poverty,' renounced control, and take your delight in things for themselves without reference to yourself, watching, observing, and to some extent knowing, then the questions of the rights and wrongs of power and control might become utterly meaningless to you, and the means of power quite valueless...

It is a natural pacifist view, which always arises in the mind when there is a war ... the view of Rivendell seems to be that it is an excellent thing to have represented, but that there are in fact things with which it cannot cope; and upon which its existence nonetheless depends. Ultimately, only the victory of the West will allow Bombadil to continue, or even to survive. Nothing would be left for him in the world of Sauron."

Perhaps the roles of the characters of Bombadil in The Lord of the Rings and the Hempstocks in The Ocean at the End of the Lane may be likened to the need for the contemplative as well as the active roles in our communities. The historian or the theologian is just as significant as the soldier. The librarian is just as essential as the policeman. The cloistered nun reciting prayers on her beads in a chapel, walled from the world, is just as essential as the parish priest ministering at the sick bed, on the battlefield, and in the sanctuary. We need the preservers of culture just as much as we need the defenders.
Posted by Emily Starr at 8:53 PM

Email ThisBlogThis!Share to TwitterShare to FacebookShare to Pinterest
Labels: J.R.R. Tolkien, Lettie Hempstock, Neil Gaiman, pacifism, preserve culture, safeguard culture, The Lord Of The Rings, the ocean at the end of the lane, tom bombadil