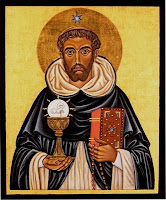 Some quotes on chant from Dominican writer up for beatification, Garrigou-Lagrange.


"The chant, which prepares so admirably for Mass and which follows it, is one of the greatest means by which the theologian, as well as others, may rise far above reasoning to contemplation, to the simple gaze on God and to divine union."


"The chant thus understood is the holy repose which souls need after all the fatigues, agitations, and complications of the world. It is rest in God, rest that is full of life, rest which from afar resembles that of God, who possesses His interminable life tota simul, in the single instant which never passes, and which at the same time measures supreme action and supreme rest, quies in bono amato."


"Mental prayer finds in liturgical prayer an abundant source of contemplation and an objective rule against individual illusions. The Divine Office cures sentimentality by continually recalling the great truths in the very language of Scripture; it reminds presumptuous souls of the greatness and severity of divine justice, and it also reminds fearful souls of infinite mercy and the value of the passion of Christ. It makes sentimental souls live on the heights of true faith and charity, far above sensibility."


"The chant, which prepares so admirably for Mass and which follows it, is one of the greatest means by which the theologian, as well as others, may rise far above reasoning to contemplation, to the simple gaze on God and to divine union."

Posted by Emily Starr at 10:19 PM No comments: Links to this post 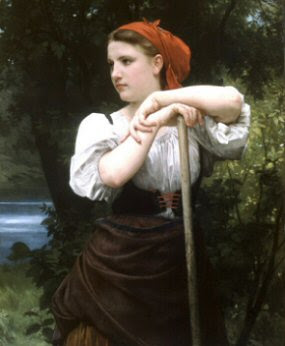 A fine piece of art from the Romantic Period! This is one of my favorite pieces of art as well as one where I have actually had the privilege of seeing the original. During my freshman year of college, three friends and I took a trip to the art museum and stumbled on this piece by Bouguereau. We all liked it so much we returned back to it at least once or twice to look at it again. Fortunately they had a postcard of it in the gift shop. She reminds me of the heroine Danielle from the Cinderella movie, Ever After, in looks as well as in her stance. I think he crafting of her face bears some resemblance to that of Drew Barrymore. But also, her position gives the impression that she is a strong, stalwart girl who can take care of herself. Her eyes challenge anyone to attempt to "mess with her." But there's also a softness about her, such as in the fairness of her complexion. Her expression, although resolute, is tender and serene. There's also a sort of nobility about her character, too. Although she's dressed as a peasant, she carries herself like a queen, not slouching but standing erect, her shoulders straight. To quote Elizabeth Bennet from Pride and Prejudice (2003), "I never saw such a woman; she would certainly be a fearsome sight to behold." Fearsome, but real and down-to-earth, I should think.
Posted by Emily Starr at 8:18 AM No comments: Links to this post

One of the Lucky Ones

I've been doing some preparatory studying getting ready for the second half of my Music History class for my senior year. This currently entails researching different composers of the Romantic Period and onward : Beethoven, Berlioz, Wagner, Fauré, Debussy, Ravel, etc. During my Beethoven research, I came across this story where the child Franz Listz (who would become a great Hungarian virtuoso pianist, teacher, and composer) met Ludwig van Beethoven and had the privilege of playing for the German composer. I have included the story below as told by Listz himself.
"I was about eleven years old when my highly esteemed teacher Czerny introduced me to Beethoven. He had long before told him about me and had asked him to hear me play. But Beethoven had aversions against prodigies and for a long time refused to hear me. Finally though he was persuaded by my indefatigable teacher Czerny and said, 'Then for God's sake – bring the little rascal.' 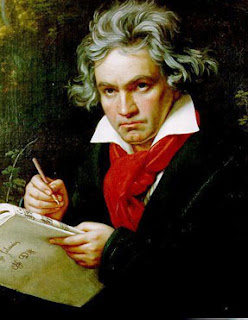 "It was one morning about ten o'clock when we entered the two small rooms where Beethoven lived. I was somewhat embarrassed – but Czerny kindly encouraged me. Beethoven was sitting by the window at a long narrow table working. For a moment he looked at us with a serious face, said a couple of quick words to Czerny but turned silent as my dear teacher signaled to me to go to the piano. First I played a small piece of Ries. When I had finished Beethoven asked if I could play a fugue by Bach. I chose the C minor fugue from Wohltemperiertes Klavier. 'Can you transpose this fugue?' Beethoven asked. Fortunately I could. After the finishing chord I looked up. Beethoven's deep glowing eyes rested upon me — but suddenly a light smile flew over his otherwise serious face. He approached me and stroked me several times over my head with affection. 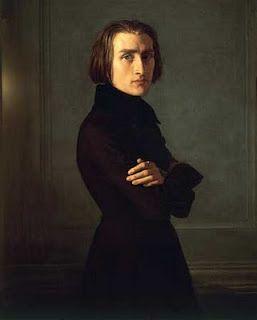 "He whispered, 'such a little devil'. Suddenly my courage rose. 'May I play one of your pieces?' I asked. Beethoven nodded with a smile. I played the first movement of his C major piano concerto. When I had finished Beethoven stretched out his arms, kissed me on my forehead and said in a soft voice, 'You go on ahead. You are one of the lucky ones! It will be your destiny to bring joy and delight to many people and that is the greatest happiness one can achieve'.
"This was the proudest moment in my life – the inauguration to my life as artist. I tell this very rarely – and only to special friends." - Franz Liszt
Posted by Emily Starr at 10:06 AM No comments: Links to this post

This is a beautiful, beautiful motet for the Christmas season. We mustn't forget that although shepherds and wise men came to adore Christ the Lord, the animals of the stable were there with the Holy Family before either came to worship the Great Savior. The text itself is taken from Matins for Christmas Day, although apparently the motet is commonly sung at Midnight Mass. Here is the translation:
O most awesome mystery
and sacrament divine and most wondrous:
that animals should look and see the Lord a babe newborn
beside them in a manger laid.
O how truly blessed is the Virgin whose womb was worthy
to bear and bring forth the Lord Christ Jesus.
Alleluia!
Many settings of this text have been composed over the centuries. The settings of William Byrd and Palestrina, two great Catholic composers of the Renaissance Period, are rather popular, but two of my favorite settings are those by the Spanish Renaissance composer, Tomas Luis de Victoria, and the still living American composer, Morten Lauridsen.
Tomas Luis de Victoria : O Magnum Mysterium sung by Chanticleer
Morten Lauridsen : O Magnum Mysterium sung by the Westminster Cathedral Choir at the Midnight Mass for Christmas 2009

I've found among the Renaissance composers Victoria is one of my favorites because of his clear,  even cadences as opposed to hiding them amidst the other voices. Morten Lauridsen I have yet to explore a lot of his music, but I really like the ethereal quality of his piece. It's very "floaty." I look forward to being able to study this type of music and compare and contrast these modern Catholic liturgical music with the old.
I find it fascinating though that texts as old as these are still being set by composers to new musical compositions. These texts don't belong to the past. They are very much alive in the Church. Not only that, but new compositions of this text can be written that are just as beautiful as those of the Renaissance, even though the style is very different.
Similarly, sacred music doesn't just consist of the music of the past, but is also welcoming of new compositions that contain the three criteria described in Pope Pius X's motu proprio, Tra le Sollecitudini: sanctity, goodness of form, and universality.  The works of both composers, Victoria and Lauridsen, exemplify these qualities even though they were composed hundreds of years apart. Sacred Music is not a dead or lifeless object in a museum. Rather, it is very much alive, with new compositions composed, sung, and appreciated alongside the old : a living tradition not unlike the Catholic liturgy it is meant for. I'm just beginning to discover these modern composers and the beautiful works they have created, so perhaps there will be more brought here as the new year progresses. I wish you all a blessed new year filled with beauty and truth!
Posted by Emily Starr at 7:24 PM No comments: Links to this post

For When Fairy Wings Get Too Tired? 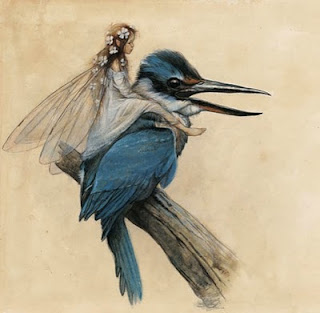 "For When Fairy Wings Get Too Tired?" A little fairy perched atop a kingfisher.
Reblogged from:   Goldenfeet
Posted by Emily Starr at 10:36 AM No comments: Links to this post