Celebrating The Boy Who Lived in 2018 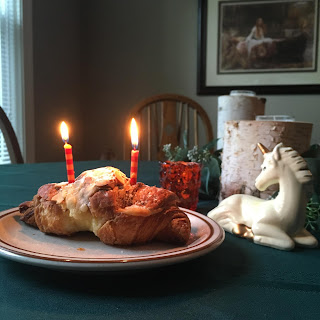 In this hobbit hole, we celebrate Harry Potter's birthday, even if it's just me, which was the case this year. And so I stopped at one of my favorite cafés, picked up an almond croissant, lit a few Gryffindor themed candles, and wished Harry many happy returns of the day.

I was a late bloomer when it came to the Harry Potter fandom (well meaning but cautious parents). I was respectful of my parents' wishes, but I was resolved at a young age that someday I would read them and evaluate them for myself, and eventually I did just that... though it wasn't until I was in grad school (2012-2014ish).

Was it worth the wait?

Absolutely. I think J.K. Rowling has created a beautiful series that merits a place alongside the novels of Roald Dahl, Madeleine L'Engle, and Lois Lowry.  They are filled with Catholic themes and universal truths about love, sacrifice, and friendship. Indeed, I am not sure Rowling herself realizes how great the series actually is, as meager publications like Harry Potter & the Cursed Child appear on the literary scene (I do think the Fantastic Beasts franchise has been successful thus far, but it is still in the early stages, so we'll see...).

But I digress. Ever since I have come to know them, I have resolved to preach the truth and beauty of the original series through subtle nods to the fandom in my home, my workplace, and not-so-subtle nods on social media. (Side note: I am convinced the devil hates Harry Potter, too, because he knows it's a great story and he'll do whatever it takes to subvert the message and keep kids from reading these books).

Here are eight reasons why I love Harry Potter and why I believe it should be part of every kid's literary arsenal:

#1. The core of the entire series is the triumph of sacrificial love, particularly as exemplified in a mother's love for her child.

#2. The beauty and joy of true friendship as seen in that of Harry, Hermione, and Ron, as well as their classmates.

#3. The beauty and joy of family, specifically the Weasleys, who are a fantastic example of the Church's concept of creating a domestic church community within the home. Haley Stewart over at Carrots for Michaelmas argues that the Weasley family is probably Catholic, and while I think this is a bit of a stretch, I have to admit that all the signs are there!

#4. The absolute rejection of the pursuit of power.

#6. The need for compassion, empathy, and forgiveness, especially when dealing with complicated characters such as Severus Snape and the Malfoy family. It is essential to help young readers understand that no one is totally wicked, and that when people hurt others, it is often because they themselves have been left hurt or unloved.

#7. Mister Rogers Moments (for lack of a better term) like this conversation between Professor McGonagall and Neville Longbottom: "It's high time your grandmother learned to be proud of the grandson she's got, rather than the one she thinks she ought to have." Kids need to know that they are loved just as they are, regardless of their abilities, their looks, other people's expectations, and so forth.

#8. That time in Book Seven where J.K. Rowling dropped a truth bomb about the dignity of the human person via Kingsley Shacklebolt: "I'd say that it's one short step from 'Wizards first' to 'Purebloods first,' then to Death Eaters ... We're all human, aren't we? Every human life is worth the same, and worth saving."

Here's to you, Harry and companions. Thank you for being there for us through thick and thin, and for reminding us, when things grow dark, to turn on the light.
Posted by Emily Starr at 10:05 PM