Darkest Hour 2017 and the Opposition of Evil

One of my new favorite pastimes post-graduate school is going to the movies. This year I went to see five of the nine films nominated for Best Picture this year: Darkest Hour, Lady Bird, Phantom Thread, The Shape of Water, and The Post.

Of all of the films that were nominated for Best Picture that I saw this year, my personal favorite was Darkest Hour. I ended up going to see it on a whim with a friend on a Friday night this past winter. I remember listening to Oldman's delivery of Winston's famous speech, "We shall never surrender," my heart pounding in my chest, and feeling as though I was about to leap out of my seat and follow this bulldog of a man to the ends of the earth!

Gary Oldman's performance as Winston Churchill in Darkest Hour was pure artistry, and Ben Mendelsohn's King George VI was the best portrayal of the most recent King of England that I have seen on film to date (which is saying a great deal as Colin Firth and Jared Harris each gave terrific performances of the role in The King's Speech and The Crown, respectively). While each actor had their own unique way of portraying the king's speech impediments and his strength of character, Ben has the advantage of very much looking the part. In fact, if one were to do a profile comparison of the two, the actor and the king himself are almost identical.

The movie unfolds over a matter of days, beginning with the appointment of Churchill as prime minister and following him into one of the most harrowing moments of the Second World War as the nation faces imminent invasion by Nazi Germany. Finding himself alone, Churchill must rally the  the nation to hold fast in its opposition to the Nazis rather than attempting to negotiate peace terms, even if it means the end of the British nation as they know it. 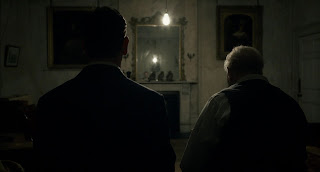 The film beautifully recreates the tension and desperation felt by many in those few days as the fate of Western civilization hung in the balance. As I watched the drama unfold, one couldn't help but wonder if one might have had Churchill's courage and clarity of mind if placed in his position. For it is a question worth considering: would it have been morally justifiable to submit to the Nazi regime, knowing about their obscene ideology, in exchange for the survival of what remained of the British nation, its culture, and its citizens? Was the evil of Nazism so profound that it had to be opposed at all costs?

Unlike many wars in the history of western civilization, the Second World War has the advantage of a clear delineation of good vs. evil, and in hindsight it is easy to say, "Of course, we must fight Nazism to the death," because we know what happened. But standing on the precipice of that defining moment in the history of the western world, not knowing the outcome, Churchill still had the courage to stand his ground and the foresight to realize that, in this case, there could be no compromise. In his own words:

Darkest Hour serves as a beautiful and poignant reminder that death is not the worst thing that can happen to you, and that the good in this world is worth fighting for, even if it means you may lose.
Posted by Emily Starr at 9:51 AM