We live in a time when the Harry Potter fandom is alive and well, and the fierce and salvific courage of Lily Potter, Mrs. Weasley, and so many other mothers and women in the Harry Potter world is a truth universally acknowledged. And rightfully so!

But I cannot help but ask: where are the fathers? If I were to make a list of smart, compassionate, fierce, and courageous dad and mom figures in current television shows and film, the latter would come to me much more quickly than the former. However, thanks to shows like Stranger Things and This is Us, I am happy to see a few father figures out there that can hold a candle to the strength and wisdom of iconic dad figures such as Mr. Walton, Mr. Ingalls, and Ben Cartwright. 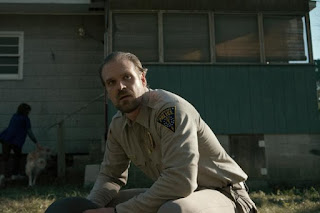 I am speaking primarily of the junkie cop/troubled lawman, Police Chief Jim Hopper. From his stalwart courage as he brazenly breaks into Hawkins Lab to face the monsters lurking therein and his shrewd thinking as he slowly unravels the mystery of Will's disappearance to his fierce protection of Joyce and the kids of the Hawkins AV Club (especially Eleven), Hopper is certainly a force to be reckoned with in spite of his grumpy demeanor.

Now, I will certainly admit that in many respects Jim Hopper is at odds with the likes of Mr. Walton and Mr. Ingalls. While the latter are more akin to Odysseus, serving in many respects as examples of the 20th century "ideal man," Hopper is deeply flawed, from his drug and alcohol abuse to his raw, internal struggles with grief after the loss of his daughter.

Yet, Hopper quickly became one of my favorite heroes for that very reason. In the moment of crisis when his friends need him the most, Hopper overcomes his demons -- especially when he and Joyce venture into the Upside Down to find her son, and while he is having flashbacks of his daughter, he is there for her and helps to calm her fears in the face of uncertainty.

Hopper also has the courage to admit when he makes mistakes, and confesses when he is wrong -- as is the case with his mishandling of the protection of Eleven in season two. Similarly, in season two when Mike is angry at him for concealing Eleven, Hopper doesn't retaliate. Instead, he lets Mike be angry with him and lets him feel his (justified) emotion of betrayal. There is also a scene soon after Joyce has lost her boyfriend Bob (Bob Newbie, Super Hero!!!), and Hopper goes and sits with her. He doesn't say a word -- he comforts her simply with his presence.

In short, in the words of Haley from Carrots for Michaelmas, we need to remember that you don't have to be a saint to be a hero, and conquering your internal demons is just as noble and brave as fighting stranger beasts from alternate dimensions.

While I will always love the idealism of Mr.s Walton, Ingalls, and Cartwright, the honest, flawed courage of Jim Hopper serves as a comforting reminder that we are all imperfect but we are all called to heroism as spiritual fathers and mothers (even if we are not all called to literal fatherhood and motherhood in the sacrament of marriage). I hope that characters like Hopper and the Dad figures from This is Us signal the start of a trend in television where dads may have their demons, but they do not let these demons define them as they strive to fight for the good and protect those they love, flawed and valiant.
Posted by Emily Starr at 7:54 PM