Yesterday was the feast day of the recently canonized St. John Paul II, and I couldn't let the day go by without posting an excerpt from this man's beautifully written Letter to Artists.

Let me begin by saying that, among popes, John Paul II was unique even in the eyes of the pagan and the agnostic, as evidenced by the following observation from gay icon, Quentin Crisp:

"Surely, though, the perfect example of someone who found a job to match his style is Pope John Paul II. Like Pope John XXIII, the only other pope in living memory to have style, he brought to the papacy the humility and charm to carry out his pastoral duties as the gentle shepherd of a giant flock, and at the same time the sense of uncompromising strength and authority to be His Holiness the Supreme Pontiff, the doctrinally infallible successor of St. Peter. When God created the job, He must have had Karol Wojtyla in mind." -- Quentin Crisp, Doing It With Style. 1981. 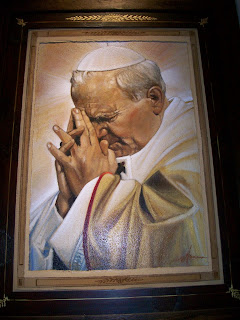 I was given the blessing of seeing St. John Paul in person at a very young age.  I was thirteen and I was standing in the circle of St. Peter's Square with my dad and sister for the Beatification Mass of Bl. Mother Teresa of Calcutta. It was truly an amazing experience to be able to stand in his presence and to witness the honoring of Bl. Teresa, a woman whom John Paul himself deeply cherished. Although he was quite frail by then, it was precisely this frailty that was so moving to me. His refusal to hide away in spite of his weakness, to allow the world to see his suffering and his vulnerability is as remarkable to me now as it was then, for it is a choice that I know that I and most people would not be inclined to make.

Fast forward eight years to me as a sacred music major sitting in a medieval Carthusian monastery in the middle of the Alps in Austria. I was a junior in college studying abroad for a semester in a little town called Gaming, taking an art appreciation course in which I was required to read this man's Letter to Artists. Although I knew that the John Paul had been a poet and an actor as well as a theologian and a philosopher, I was not familiar with the letter and so, naturally, I savored every word! Someday, if I ever teach a sacred music/art appreciation course of any sort to high school/middle school/college students, this is one of the first things we are reading! I close with one of my favorite excerpts from the letter.

"Society needs artists, just as it needs scientists, technicians, workers, professional people, witnesses of the faith, teachers, fathers and mothers, who ensure the growth of the person and the development of the community by means of that supreme art form which is 'the art of education'. Within the vast cultural panorama of each nation, artists have their unique place. Obedient to their inspiration in creating works both worthwhile and beautiful, they not only enrich the cultural heritage of each nation and of all humanity, but they also render an exceptional social service in favour of the common good.

The particular vocation of individual artists decides the arena in which they serve and points as well to the tasks they must assume, the hard work they must endure and the responsibility they must accept. Artists who are conscious of all this know, too, that they must labour without allowing themselves to be driven by the search for empty glory or the craving for cheap popularity, and still less by the calculation of some possible profit for themselves. There is therefore an ethic, even a 'spirituality' of artistic service, which contributes in its way to the life and renewal of a people. It is precisely this to which Cyprian Norwid seems to allude in declaring that 'beauty is to enthuse us for work, and work is to raise us up'."