The Beauty of a Woman 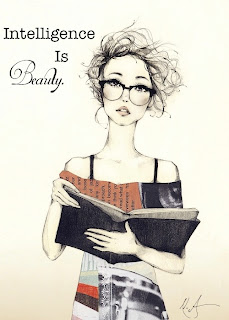 This post is a commentary semi-inspired by a note a friend of mine posted on Facebook several months ago. In this note, my friend complained about the many recent posts and memes depicting girls and books and implying that the classiest girls are those who do a considerable amount of reading. She argued that just because a girl reads a lot does not automatically make her a smarter, or better person. Ever since I read her note, it has been on my mind. Then when I saw this picture while browsing through my tumblr feed, I remembered her post and decided I'd add my two cents worth to the conversation.

It certainly seems true that being well-rounded and reading a great deal has become particularly attractive in recent decades. One of the best ways I think to sum this up is found in a scene from the first episode of the second season of the BBC series' Sherlock, where Irene Addler quips to Sherlock,  "Brainy is the new sexy."

Sara experiences her own moments of doubt and despair, but she is able to overcome them through her kindness and her vivid imagination. She does not become bitter or selfish because of her misfortunes. One day while running errands for the cook, she comes across a six-pence on the street outside a bakery. Instead of pocketing it, she takes it in to the baker and inquires if anyone has come looking for the money. The baker insists that she keep it as  no one has come inquiring after the lost coin. Sara uses the sixpence to buy a few rolls from the baker. However, having noticed a starving beggar girl sitting outside the door, Sara gives most of them to her. Sara's ability to look beyond her own sufferings to ease the pain of others shows that beauty does not originate in reading, knowledge, or wealth, but in simple acts of kindness and love.

Now one might argue that one learns about living a life of virtue through reading. This is certainly true, but a person must critically evaluate and apply this way of thinking to their own life: in short, reading/educating one's self is a means to an end, not an end unto itself. One must also be able to discern the good from the bad -- not all one reads is worth emulating.
I conclude with a few words spoken by Audrey Hepburn. As it turns out, they are not her own words but the words of educator-humorist Sam Levinson. She read the following on Christmas Eve in 1992 and she adopted it for when she was asked for beauty tips. For lovely eyes, seek out the good in people.

For a slim figure, share your food with the hungry.

For beautiful hair, let a child run his or her fingers through it once a day.

For poise, walk with the knowledge that you never walk alone.

People, even more than things, have to be restored, renewed, revived, reclaimed and redeemed; never throw out anyone.

Remember, if you ever need a helping hand, you'll find one at the end of each of your arms.

As you grow older, you will discover that you have two hands, one for helping yourself, the other for helping others.

The beauty of a woman is not in the clothes she wears, the figure that she carries or the way she combs her hair.

Email ThisBlogThis!Share to TwitterShare to FacebookShare to Pinterest
Labels: A Little Princess, audrey hepburn, brainy is the new sexy, Frances Hudgson Burnett, intelligence, Sam Levinson, the beauty of a woman