On Libraries, Books, and Kindles Danielle: It makes me want to cry.
Henry: Pick one.
Danielle: I could no sooner choose a favorite star in the heavens.
Henry: What is it that touches you so?
Danielle: I suppose it is because when I was young my father would stay up late and read to me. He was addicted to the written word and I would fall asleep listening to the sound of his voice.
Henry: What sort of books?
Danielle: Science, philosophy... I suppose they remind me of him. He died when I was eight. Utopia was the last book he brought home.
Henry: Which explains why you quote it.
Danielle: I would rather hear his voice again than any sound in the world.
[Henry smiles, then the smile fades and he begins walking down the stairs away from Danielle]
Danielle: Is something wrong?
Henry: [turns to face her] In all my years of study, not one tutor ever demonstrated the passion you have shown me in the last two days. You have more conviction in one memory than I have... in my entire being.
[laughs slightly, walks away, Danielle follows]
Danielle: Your Highness, if there is anything I have said or done...
Henry: Please... don't. It's not you.


THis is one of my favorite scenes in the chick flick Ever After, where Prince Henry takes Danielle to the library at a nearby Franciscan friary. I usually tend to dislike chick flicks, but this one carries a special place in my heart. First of all, it's a fairy tale, a Cinderella-retelling, so some of the outrageous things that occur like falling in love within a matter of days doesn't bother me. Second, it's a great portrayal of what a female role in a relationship should be: Danielle is confident in herself, she possesses self-knowledge and this is part of what draws Henry to her. She calls Henry on to become a better person while not being overbearing, and he rises to the occasion. Plus the scenery and the costumes are just beautiful, there's two scenes of beautiful chant and polyphony, there's Leonardo DaVinci (he's the fairy godmother character, LOL), there's sports, true love! What more can you ask for? ;-)
Anyway... I'm bringing up this whole topic because today during the liturgical conference held on campus, Dr. Bergsma gave a lecture on the nuptial and liturgical orientation of salvation history. During the section on the bridegroom imagery of the Old Testament, Bergsma compared the bridegroom Isaac to the well-beloved, popular protagonist, Mr. Darcy from Pride and Prejudice. He specifically mentioned the scene where Lizzie begins falling in love with Mr. Darcy after seeing his magnificent estate. Bergsma said she was drawn to his wealth, but I disagree. Wealth was a part of it, for sure -- a woman likes to see that a man can provide for a wife and a family. It's a definite plus! But it was more so the fact that it now becomes apparent to Lizzie that Darcy is a man of taste and a man of class. The scene in Ever After is a bit different from this incident with Lizzie and Darcy. At Danielle and Henry's first encounter, it seems that Henry doesn't have much appreciation for literature, or at least not for St. Thomas More's Utopia. But his lakc of appreciation is what makes their little field trip to the library even sweeter, in a way, because he's trying to branch out and appreciate her interests. He's trying to gain some "class"-standing in her eyes, and I think it does work. Personally, it would have been rather difficult for me to resist Henry's intentions if I were taken on such a date: books, Franciscan friars, a beautiful cloister, and chant, beautiful chant. I mean, what's not to like? Especially if you're a nerd like me? FYI to all ye men in want of a wife, women do appreciate men with class, even if the women themselves don't appreciate it! ;-)
And another point : I didn't intend to add this point but I'm going to anyway, a plug for books vs. kindles that was made by roommate and one of my best friends who is also an English major. Now, I'm not going to say that kindles should be obliterated from the face of the earth because they do have their uses and their advantages -- however, I DO think that the world is going to experience a grave impoverishment if books and book binding are lost for the sake of creative destruction, and I think this scene and a similar scene in Beauty and the Beast prove this. What do you think would have happened if Prince Henry had taken Danielle to a digital library? Would it have been as moving an experience? In the Disney classic Beauty and the Beast when the Beast shows Belle his beautiful library and gives it to her, do you think she would have been as impressed?  There is something about the physicality of a thing that rings true within our souls. It's similar to how we are beings composed of body and soul, physical as well as spiritual. I suppose it is similar to the experience of going to see the Messiah performed live as opposed to listening to a recording of it from itunes. It's beautiful and it can still move you, but it's not quite the same as being in the concert hall and thrilling at the "Alleluia" chorus. Similar to a book vs. a kindle: the kindle still communicates the words to you, but it's not quite the same as smelling the pages of the book and feeling the cover between your hands. It's a more personal experience! It will be a sorry existence that bids farewell to the physicality of a book. 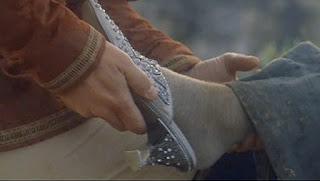 I conclude with a quote about libraries: