Here is the first poster for Pixar's next movie "BRAVE" due to come out next summer! This is Pixar's first fairy tale and tells the story of a Scottish princess named Merida. Here's the plot synopsis!
"Brave is set in the mystical Scottish Highlands, where Merida is the princess of a kingdom ruled by King Fergus and Queen Elinor. An unruly daughter and an accomplished archer, Merida one day defies a sacred custom of the land and inadvertently brings turmoil to the kingdom. In an attempt to set things right, Merida seeks out an eccentric old Wise Woman and is granted an ill-fated wish. Also figuring into Merida’s quest — and serving as comic relief — are the kingdom’s three lords: the enormous Lord MacGuffin, the surly Lord Macintosh, and the disagreeable Lord Dingwall."
I am a great lover of fairy tales, so I have high hopes for this movie! The original title was going to be "The Bear and the Bow," but was changed some time ago. I don't mind, but I still hope that there is a bear in the movie and that he is a good bear. I am a devoted fan of good bears in fairy tales, such as the Grimm fairy tale Snow White and Rose Red. The teaser trailer is due to come out within the next twenty-four hours, and I am tapping my foot impatiently.

Here is one of the first released images from the movie. I love her red hair! Of course she would have red hair, the little Scottish maid. I look forward to meeting her. The film looks like it's going to be gorgeous from the screen cap!
But speaking of red-haired heroines, this brings me to another piece of fairy tale news. One of my favorite fairy tale retellings, The Shadow of the Bear by Franciscan University graduate Regina Doman has been made into a student film due to premier tonight in Minnesota. The story is based off of the fairy tale afore mentioned, Snow White and Rose Red, the story of two maidens and two enchanted princes. But what makes or breaks a retelling for me are the twists that are added to the tale, what makes it original. In this version, the tale is told in New York City, with no magic, witches, or enchantments, at least not by your textbook definition. The retelling also has a Catholic twist to it, has several illusions to other works of literature, especially G.K. Chesterton, one of the most valiant 20th century defenders of both fairy tales and Christianity. What else does it contain? Well, not to be cliche, but ...
"Sports. Knights. Nuns. Ninjas. Minstrels. Miracles.
Princesses. Priests. Chases. Escapes. Rescues. Revenge. Torture. True love!" 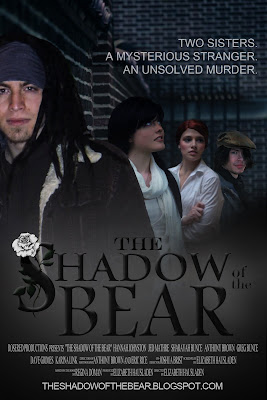 This is by far one of my top ten favorite books: I have reread the novel several times (something I don't usually do), I have done numerous sketches of scenes from the book, compiled soundtracks, even composed a few themes on the piano in hopes one day they would make a movie of it. But now I am very excited to say that the film will be released sometime this summer on DVD! It has taken several years to make this project a reality. Below I have posted some links to little clips of the movie the director (her blog can be found here) has posted as filming took place. Many thanks to Elizabeth for all of the heart and soul she put into making this film happen!
Clip #1:
Chess Scene
Clip #2:
Snowball Fight
Enjoy the clips and I hope you might add The Shadow of the Bear to your reading list!
Posted by Emily Starr at 6:35 PM

Email ThisBlogThis!Share to TwitterShare to FacebookShare to Pinterest
Labels: Fairy Tales, Pixar, Regina Doman, The Brothers Grimm, The Shadow of the Bear

Brave looks like it could be adorable! Looking forward to that!
I just reread the fairy tale novels.... so good! :) I have mixed feelings about seeing it in movie form, but I am willing to give it a try.