On The Feast Of St. Francis Of Assisi 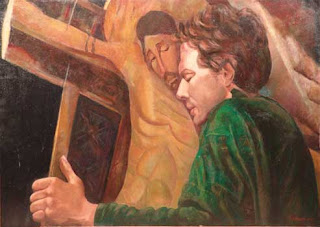 "I lean me against the Cross of Christ, and there I will fasten me." -St. Catherine of Siena

"The world shrinks from showing us the real Francis: a man drawn into the embrace of Crucified Love and marked by Love’s own wounds; a man who went about weeping uncontrollably and saying over and over, 'Love is not loved! Love is not Loved!'

The vocation of Saint Francis himself began with an image: the crucifix of the church of San Damiano. Speaking from that crucifix, Christ himself said, “Francis, go repair my house which, as you see, is falling into ruin.” The vocation of Saint Francis was ratified when he himself became an image of Crucified Love, an icon written by the Holy Spirit in fire and in blood.

Thomas of Celano, Saint Francis’ first biographer, writes that, “In truth there appeared in him a true image of the cross and of the passion of the Lamb without blemish who washed away the sins of the world, for seemed as though he had been recently taken down from the cross, his hands and feet were pierced as though by nails and his side wounded as though by a lance” (First Life, 112). We become what we contemplate."
Posted by Emily Starr at 2:14 PM